Photos of our three babies!

So the babies have names!

She is known as Dolce around the barn and quite aware that she is _very_ important! 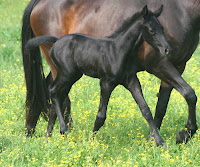 We finally decided on a good name for the black colt - Aloysius WF (Avebury WF x Amelia WF) DOB: May 19, 2009 It is our homage to A.A. Steiert who imported his ancestor Abundance in 1965! Louie is quite the little mover and just a delight each day. :) 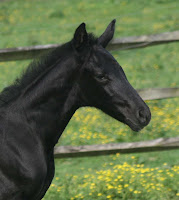 The littlest colt is no longer so little! Drummond WF (Dressage Royal x Abracadabra WF) is getting the hang of his long legs and almost ready to join his agemates out in the big pasture for each day. We picked this name as it means 'Druid's hill' - thereby playing on the magic theme for Emmy's offspring. 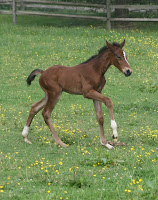 We are still waiting for our last foal of 2009! Sabrina WF (Savannah's full sister) is expecting a Waldaire colt or filly in the next week or so...Keep checking back - you guys know I'll post pictures as soon as the baby arrives! :)
Posted by Ellie at 6:14 PM