Some Fun for our Friends and Fans to End the Year!

Things here on the farm are busy, busy, busy! Which is always good. We have quite a few horses joining our training program, so check back often for links to their pages and new photos!

We are trying to encourage more interaction from our supporters on Facebook and for any followers here on the blog too. There are a great many photos from over the years on our FB page HERE, so if you want to play along, go ahead and flip through as many as you would like and send us the link(s) to your Top 10! We will announce the winners to begin the New Year for a bit of fun!


There is a Group Lesson this coming Saturday at 2PM - please email or message either me or Anne@watermark-farm.net to sign up. We will make the decision as to the indoor or outdoor early on Friday AM, so if there is demand, we will split into 2 groups inside - a 2PM and a 3:15PM.


There is a Long Lining Clinic set for December 8th. You can sign up for that by emailing me (Ellie@watermark-farm.net) or calling Anne on her cell.

Happy Riding!
Posted by Ellie at 7:08 AM No comments:

If you want to be competitive and have fun at the 2nd-4th Levels AND have a horse that loves to jump a bit (meaning they're brave and careful) plus they have a sensible and grounded nature...give Anne@watermark-farm.net a buzz!!! We have 5 different horses that fulfill those requirements - different sizes, genders, heights, colors and some are quite flashy with a bit of white! If you are more ambitious and want counting changes and a been-there-done-that attitude towards showing, there are some schoolmasters available for lease! If you want to start from the beginning and have a clean slate to work with - we have some young, unstarted horses that might be interesting to you!

You never know until you see them in the flesh!!!

Support Small Businesses!!!
Posted by Ellie at 6:01 AM No comments: 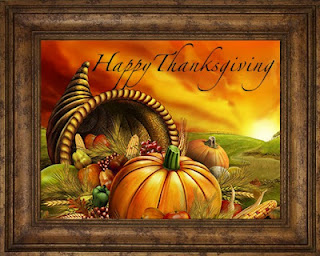 We will be beginning several new Clinic Series in December!!!

and Making The Jump from Second to Fourth Level and Beyond.

Dates and fees to be added shortly!!
Posted by Ellie at 12:07 PM No comments:

It doesn't get more locally supportive than this! Buy local! Shop in Small Businesses this Saturday!!!

Autumn Discount Spectacular is coming to an end! 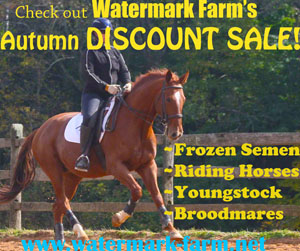 Thank you to all of those who participated in our sale! If you have missed this Discount Sale - please keep an eye out as we may or may not have a sale in the future! If you are not feeling the love for Frozen, check out our Sales Page as there are horses undersaddle or ready to start that are currently available for purchase!

Our 2012 Autumn Frozen Semen Sale will be ending on Monday November 19th at 12 noon EDT.

If you are considering ordering from our frozen inventory, please have your contracts sent via email by that time. (ellie@watermark-farm.net)

Payments must be received by that Friday (Paypal or check).  Any returned checks or non-payment will result in all contracts and discounted pricing being null and void.

Shipment authorizations will be sent to SBS as payments clear.

The Holidays are approaching quickly and we would like to make sure that everyone has a happy and positive Holiday Season! And there is no better way of ensuring that than to have a talented, sane and fun horse to work with each day!

We will be offering a substantial discount to show homes with a trainer reference on our current Sales List!
There are a few updated photos below of a few of the Sales Horses -

And that still leaves Waverleigh, Windrose, Drummond, Dreamcatcher and Wichita Rose WF who need updated photos and videos! We also have a few horses that are available for lease at this time.  If any of the horses listed here (or on the website) are of interest - please contact Anne@watermark-farm.net (484) 880-0779 for more information and pricing.

Remember Doringcourt? He was the licensed Hanoverian stallion out of a Gluckspilz x Diadem mare who was exported to New Zealand to the lovely North Park Equestrian Centre... The young and talented Andrea Bank rides him. 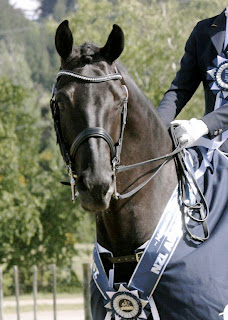 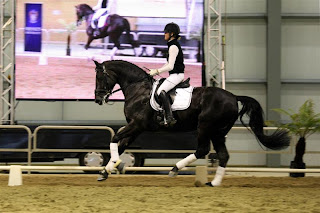 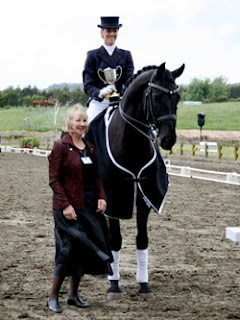 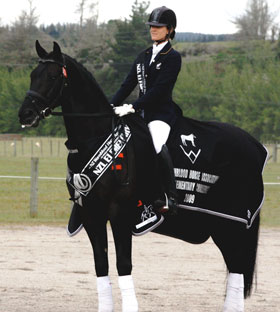 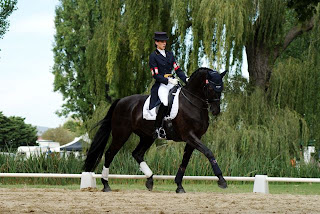 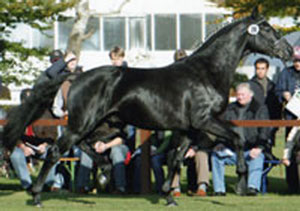 Well, if you haven't caught his name before, take note! He's cleaning up on the international circuit and continuing to climb the ranks!

Just another feather in Dressage Royal's cap of fabulous youngsters!
Posted by Ellie at 5:01 AM No comments:

A little birdie just flew by!

A little birdie just flew by and let me know our Fall Frozen Sale is about to come to an end!!! 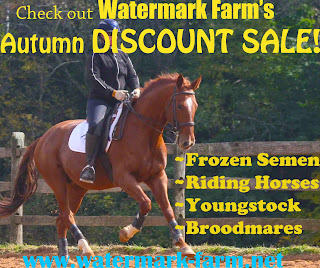 No LFG applies to these prices. The number of straws per dose has been determined by Select Breeder Services as to meet the industry standard of progressively motile morphologically normal sperm. All semen is stored with SBS in Chesapeake City, MD.

These discounts will be offered for a limited time! (meaning we will not be announcing the date when the sale ends, so buy now and SAVE!)

Please see our STALLIONS page for more information. http://watermark-farm.net/stallions.html
Posted by Ellie at 5:15 PM No comments:

A breakdown in communication! YIKES! 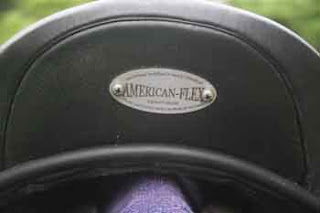 We have recently received a few inquiries about some of saddles that are for sale. We would very much like to find them new owners but are currently unable to make contact with the most recent inquiry due to an invalid number/provider.

If you (or a family member) had called recently, please contact Ellie@watermark-farm.net at your leisure.
Apologies for the disruption in communication! 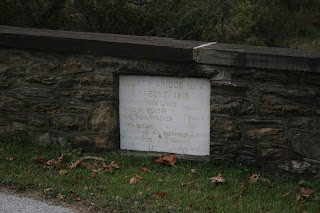 Now that the Election is behind us there is an opportunity for citizens to stand up and be heard on the Watermark Road Bridge Project! 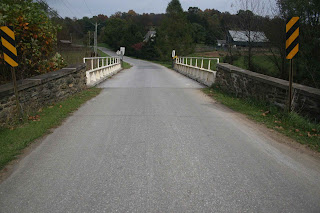 But first we must deal with a few facts!
1. There have been 0 Engineering Studies
2. The Bridge Czar of Chester County has said the "Eye of Sauron" is fixed on this bridge and it will come down
3. The County sent a crew last year to remove all of the reinforcing steel that was put underneath a decade ago without notifying anyone and the weight restriction was dropped to 8 Tons AFTER it was "improved" in 2002-2003 on the county Payroll with said reinforcing steel and refurbishment
4. 1 School Bus crosses it 4x per school day
5. It is a one lane bridge
6. The Fire Chief has stated that the fire trucks would not come over it due to the narrow roads that access the bridge. They would come down the hill to our property from Homeville/Street Road and Routes 896/10/41
7. The Township has a "permit" to send heavier trucks over the bridge even though they are beyond the weight restriction

All of this is worth an estimated $12-25 MILLION dollars of Taxpayer Money.

At the December Township Meeting for Upper Oxford, there is a forum with the engineering firm, Township Officials and various other official persons. A grand opportunity to stand up and be heard!!
Posted by Ellie at 6:07 AM 1 comment:

We have had great success and fun having our Group Lessons on Saturdays! Hopefully this will continue but we are having to keep a close eye on the weather for the upcoming weekend's adventure.

Please sign up on our FB Event Page or email Ellie@watermark-farm.net to reserve your space as it is likely that we will be indoors this week. Space is limited to 4 riders per group.

Eurodressage has a fabulous new article up about Carola Koppelmann and Desperado OLD!!! Just wonderful to read about her training program, past successes and bright star for the future! 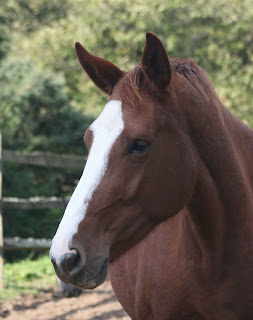 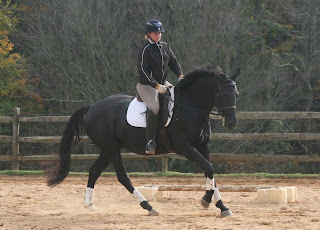 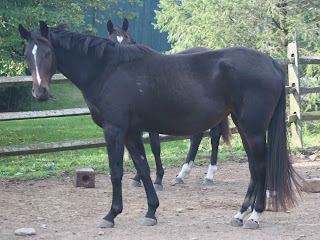 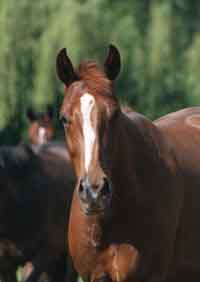 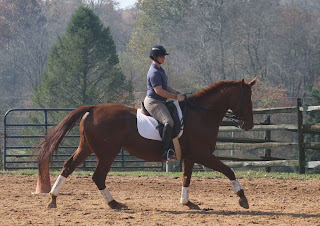 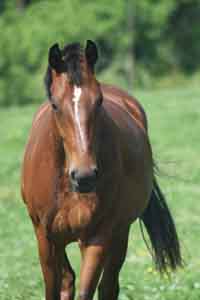 Show hunter peeps this mare is for you!! Shrug off the bias against chestnut mares - she is fancy, talented and a superlative hunter prospect for the discerning trainer! 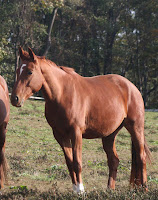 Around the barn, Westerleigh is best known as Joy and that is what she is!! Pure joy to work with! But alas, we are a dressage barn! What do we do with a horse that is clearly more suited for a different discipline??? We need to find Joy a new person! So the search is on!!!


Here is a super opportunity for a gifted hunter rider to have a fantastic horse to bring along! She is sweet, very intelligent and in need of a new career director. 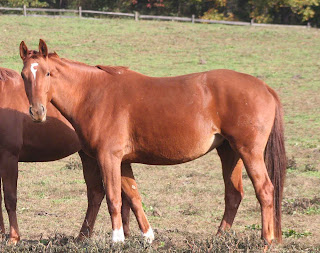 Joy is currently priced at $15,000. Please contact Anne@watermark-farm.net to discuss your purchasing options.

We prepared to the best of our abilities for Hurricane Sandy and were very fortunate to have very little damage! The Outdoor was cleared of 99% of the materials and while we got quite a bit of rain and some strong winds, our little valley protected us from the worst of the weather!

So a few images of the soggy-ness that made the days' work a bit of a challenge. We did lose our electricity for a spell - which just reinforced how dependent we all are on the power grid!!! No chance of any of us turning Amish any time soon! :)
The Muddy Run did jump her banks but beyond a bit of fence repair - we were very lucky! Our thoughts and prayers go out to all those impacted by Sandy's wrath.

This photo is from late yesterday afternoon as the first of the Outdoor's drainage system is opened. Given the brisk breeze overnight, we are hoping to be outdoors today (Thursday). If not, the indoor is all prepared to handle the lesson and training traffic!

Now for the bad news - our November Long Lining Clinic is postponed due to Sandy. We will be rescheduling for December so that everyone has a chance to enjoy Thanksgiving.

Speaking of Lessons, our Group Lesson is ON for Saturday! The 2 PM Group will go off as usual. If we are outdoors, there is an 8 horse limit (90x240' is plenty of space). If we are inside, it will be limited to 4 horses and a second 3:15 PM Group.


And last but not least enjoy this photo of our Daylily WF! Little "Stella" is growing up and showing us how special she really is as an upper level prospect! :)