Our good friend Jennifer MacNeil stopped by for a visit this week and shot some pretty awesome photos - take some time and have a peek at her work! We're making plans to have her back again, so keep an eye out for more of her lovely artwork!

Wakanda has another outing this weekend. We head to Blue Goose over in Cochranville for their Labor Day schooling show at PSG. Swing by and say "Hi!" if you're in the area! 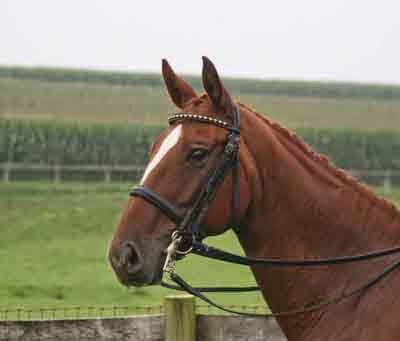 With the school year starting back up for most everyone, please keep in mind we will have the indoor available for evening lessons. Our FEI schoolmasters are ready and willing to offer their knowledge with new and returning students as well!

On the breeding news front - we have reports coming back of single dose conceptions for several of our stallions. Take a look at this beauty that has a confirmed colt on the way for 2015! 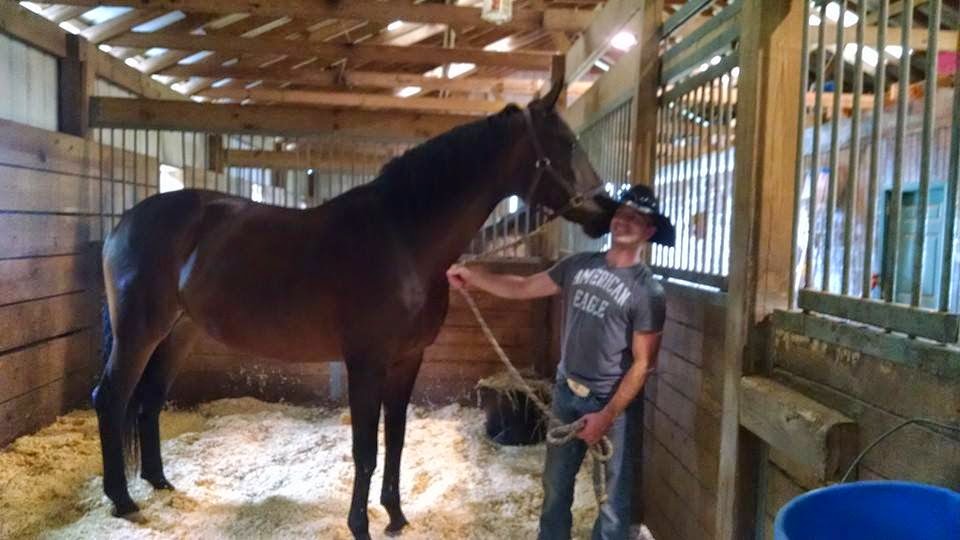 Congratulations to her owner Leslie!


Check out little Winnie (aka Wicked)! She's learning to loose jump! The jump chute went up to 2'9" and see handled it with style. Contact Twin Lights Farm (MA) for more information and pricing.

There are some very cool facets to growing up inside a family that breeds, trains and competes their own stock! Really cool as a matter of fact. Take this small slice of what is "normal" for me in a day -
Abundance (by Absatz) was an influential Hanoverian sire in the US in the 70's, 80's and 90's - very prolific and Mom and Dad kept a few of his offspring for themselves and for the farm. They were awesome competition horses and eventually went on to the breeding shed to produce more performers for us all to enjoy through the years.

Now we're not supposed to ever pick a "favorite" as there are many horse's here on the farm and they all deserve to be loved for who and what they are as individuals. (see a disclaimer! :) ) But with that being understood, Again and Again was Mom's favorite horse by Abundance. He had several famous brothers and sisters who had illustrious competition careers (Olympics, Horse of the Year, National Championships, etc) but he was beyond special. He was born ahead of the times as there were many tests that had the comment, "too much movement" and "too extravagant", but if he were to be judged against the modern scale, his gaits would be rewarded. Big time. He was one of the few horses born and bred here in the US that trained successfully up through the levels all the way to Grand Prix.

So along comes the next generation from our small time breeding operation. A small grey son Alacazam was very talented and carefully brought along to be a confident Prix St Georges by the age of 7. He went on to the NAYRC with Emily in the irons and they won the Team Silver - missing out on the cut for the Individual Finals by just a few points! Such a good youngster to handle all of that pressure and tough environment! Like his sire, he continued to move up the levels and competed Grand Prix, too.

Now Alacazam had a little redheaded sister - Abracadabra. She was(is) a bit of a spitfire! About 15.1, stout, hot to the aids and super sensitive - just a total "thinking" type of ride for a well schooled and highly feeling rider. A normal incident with her that was costly in terms of test mistake - say you're doing a canter half pass from K-X, you need to nail the centerline, proceed forward to I (or G) and do a single flying change. OK, so you're going over nicely from the corner (her half passes were a dream), you approach the centerline, begin to straighten, she feels a slight shift in your weight in the saddle and rolls out 3-5 one tempi changes. Bam! Bam! Bam! No problem, no tension...they're just easy, fluid and she thinks that's what you wanted! :) Ahhh, Abracadabra the Over Achiever...

So that brings us to Waldaire. He was a big horse, well trained by Dana, loved greatly by me and a gem in terms of producing himself time and again. We wanted to "upsize" Abracadabra a bit, bring in a few of his other stellar qualities and reap the benefits of their combined lineage of so many successful Grand Prix horses' heritage.


The first foal was a filly - Wakanda aka Wendy. She's the most like Abracadabra in terms of looks - similar head, a smidgeon taller, same body style...but in terms of riding - she is a hotter version of Waldaire with that endearing feminine quality of wanting a polite relationship with her rider. One must ASK for her to do things, never (!!!!) demand. Crystal clear, right? :) So Wendy went to Florida to Catherine's with me to advance her skill set and was my steady Eddy "practice all the work you're learning on Wyatt" on a more sensitive horse that is very trainable when you get down to the basic creature underneath it all - just like Waldaire!
So she did one White Fences Show at Third Level, got some good scores in spite of the fact I was incredibly rushed dealing with the schedule and some barn stuff that went on that day. Patrick taught her to Spanish Walk to help free up her shoulders and she thinks that is a fine game to play. Catherine gave me the system to advance her from one-one, to a line of one tempis with no drama or explosive behavior and her passage got some help too. So even though the trip hadn't been all about advancing Wendy - the trip was a resounding success! Fast forward a few months - she's now working through the whole Grand Prix and just needs some time to get the strength to put the test together. The exercises are easy and she has the most gorgeous two tempi changes...even better than Wally's were!


Now her full brother Wizard has been a protege from the beginning. Super easy to bring along the levels - changes are a dream, very malleable mentally, super willing to work - a good boy even as a breeding stallion. Oh and did I mention his uncanny resemblance to Waldaire? He rides a lot like Abracadabra but looks like Wally! A very intriguing combination of the two parents and not dissimilar from Wendy...but not the same either. Like his older sister, he's working the Grand Prix and finds the piaffe and one tempis to be the easiest. Their pirouettes aren't too shabby either...but I'll move along to the next horse...

The other full brother Whodini got the long legs of the trio. He's a fun horse to ride, too. Who has the biggest engine of the three, wants to please in the worst way and has "the look" that is so popular in the show ring. He might need a bit more time to gain all the strength that the other two have in spades, but he's also the youngest! A very bright future is just around the corner for Who!

After three such super babies from Wally, we switched things up and bred Emmy at the advanced age of 19 to Dressage Royal. The following spring Dreamcatcher was born! Ohhhhh, he is exciting! And fun to ride! I will get some photos and maybe some video to share with everyone...he's special! Now, he is a leggier version of Wendy in my opinion - still has her super canter, hot to the aids, about 16.2 with some long legs, super comfy gaits...me likey is the best way to put it! ;) And I'll leave it at that as he's on the Keeper List for a while longer. I'm intrigued by him to say the least - and not just because his barn name is McDreamy!

The last foal we bred from Abracadabra was also by Dressage Royal - Drummond arrived in the spring of 2009. He's a tall, super smart, leggy, lanky fellow that is very cooperative and fun to bring along with big, uphill gaits.


Like Dreamcatcher - he's going to be a Keeper to see how he develops.  Here is a snippet of video to show you all why he gets to stay for a bit longer -


So that's a bit of the story behind our "magic" mare and her offspring. All of the babies name meanings can be found on BabyNames.com and tied in nicely with the theme. It's pretty fun to be getting ready to bring another one of her babies out at the FEI level and have others waiting in the wings...

Which brings me to - it's time to go out and start riding! Have a super day! 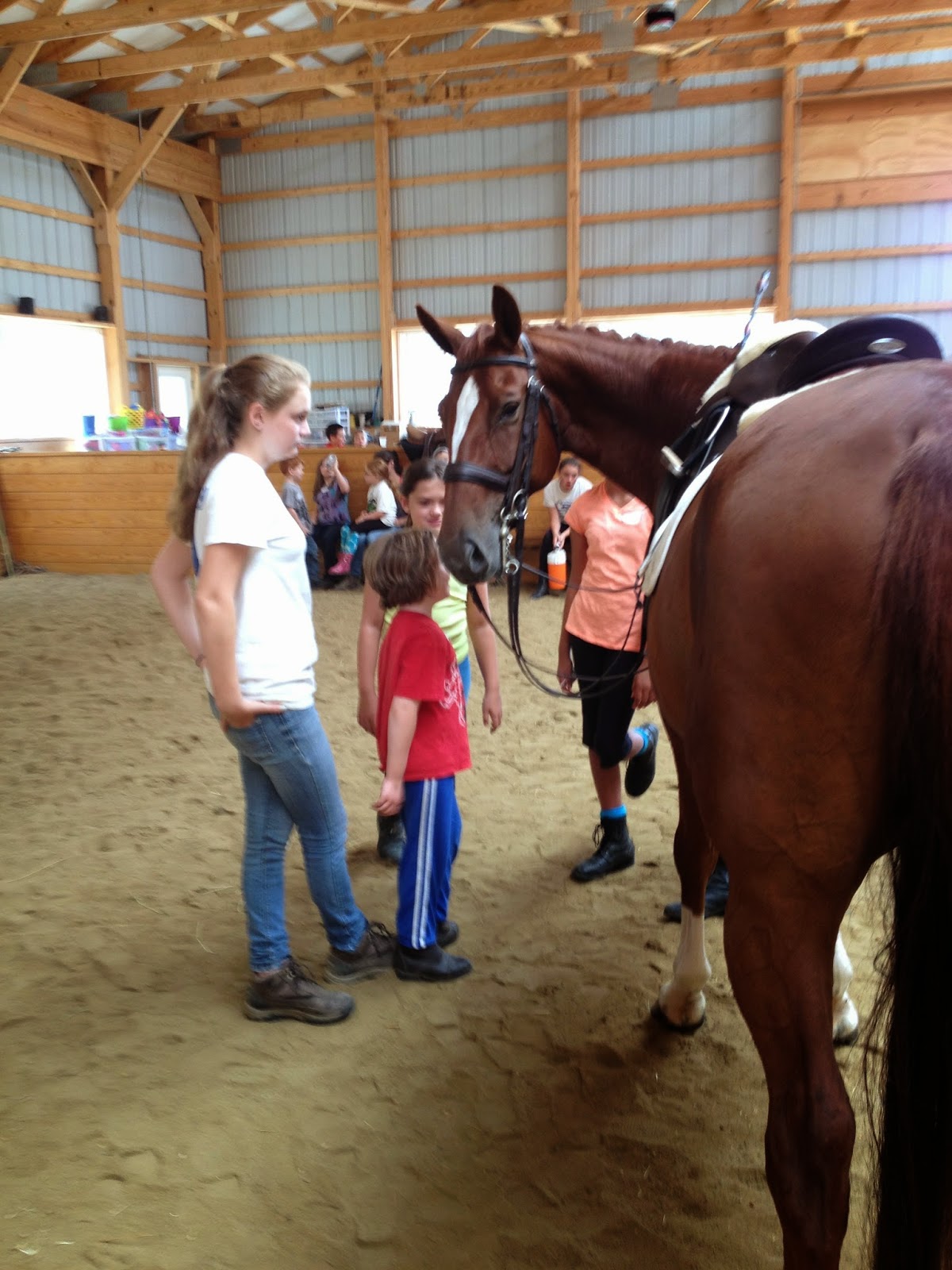 Edited to add a small update - 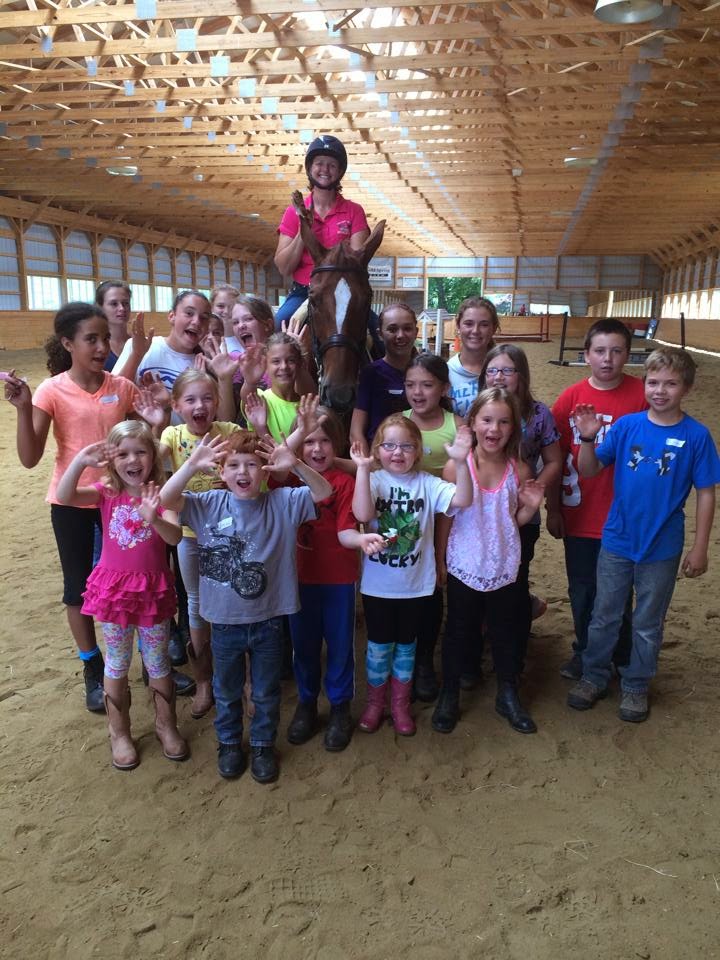 I was invited to Cold Spring Farm yesterday to do a dressage demonstration for the Pony Campers. It was a super opportunity to get Wendy out before she starts competing. She was perfect about the new environment and all the "distractions" - like a machine through all her exercises with enough presence to fill the arena too! Wendy loved all the kiddos and was a star interacting with all of them after her workout!

Thank you to Cindy for allowing us to come share what makes dressage so much fun! 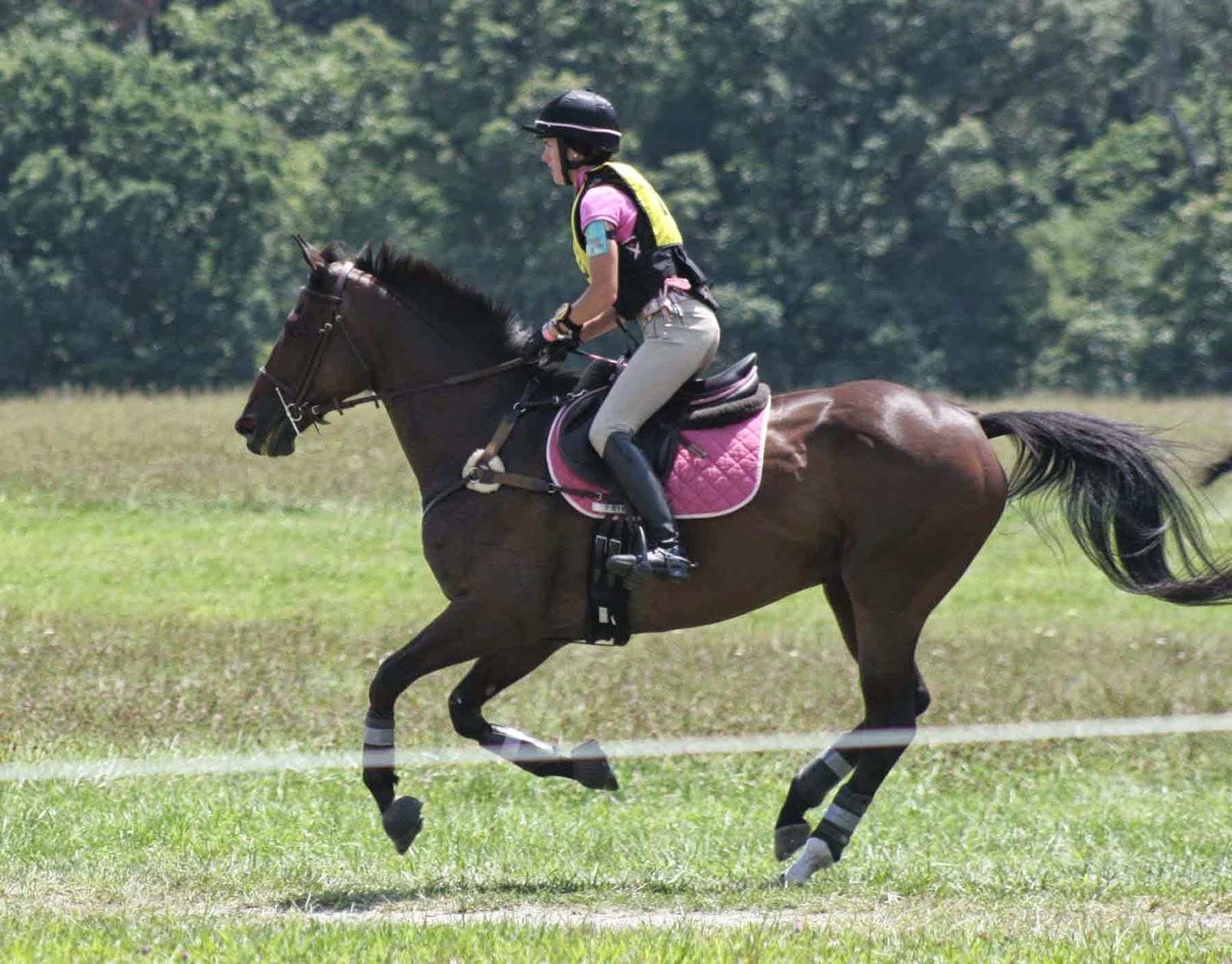 Big congratulations to Sara G. and As You Wish WF (by Adamant) on a super successful weekend at Fair Hill! It was their first Preliminary and a resounding success with improvement in the dressage and show jumping and then a stellar Cross Country round!!!

Enjoy the photos and keep an eye out for Team Pink this fall! 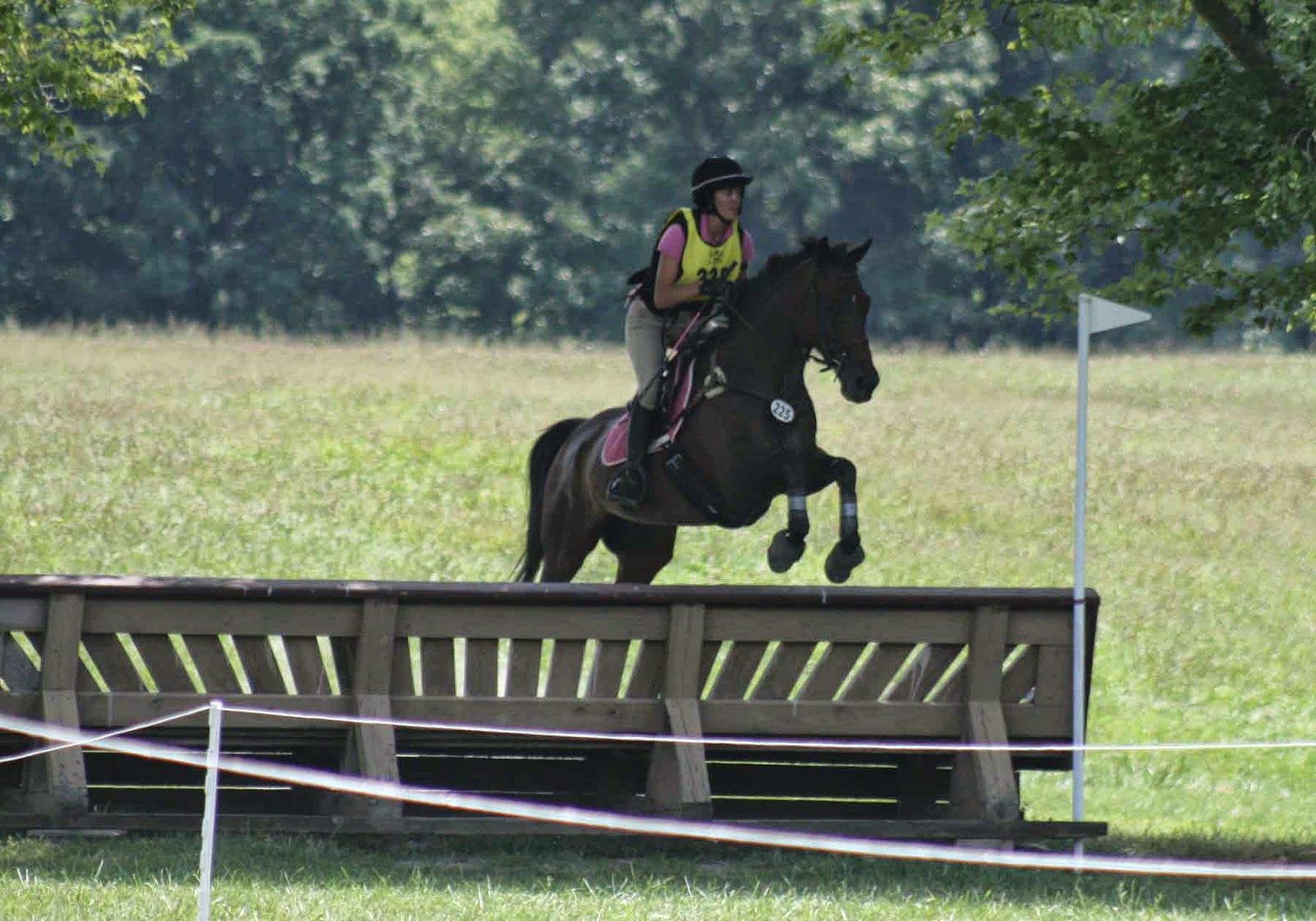 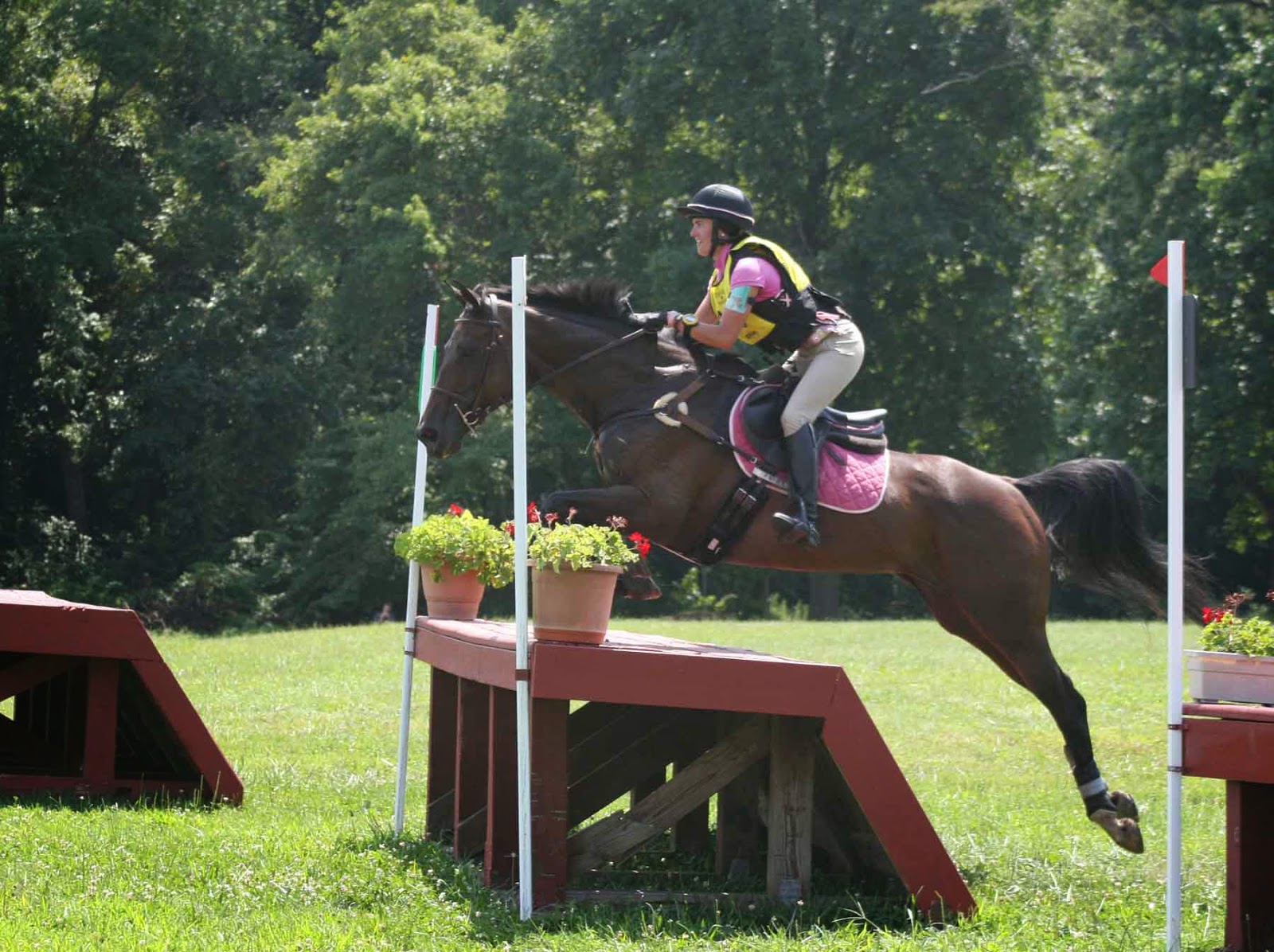 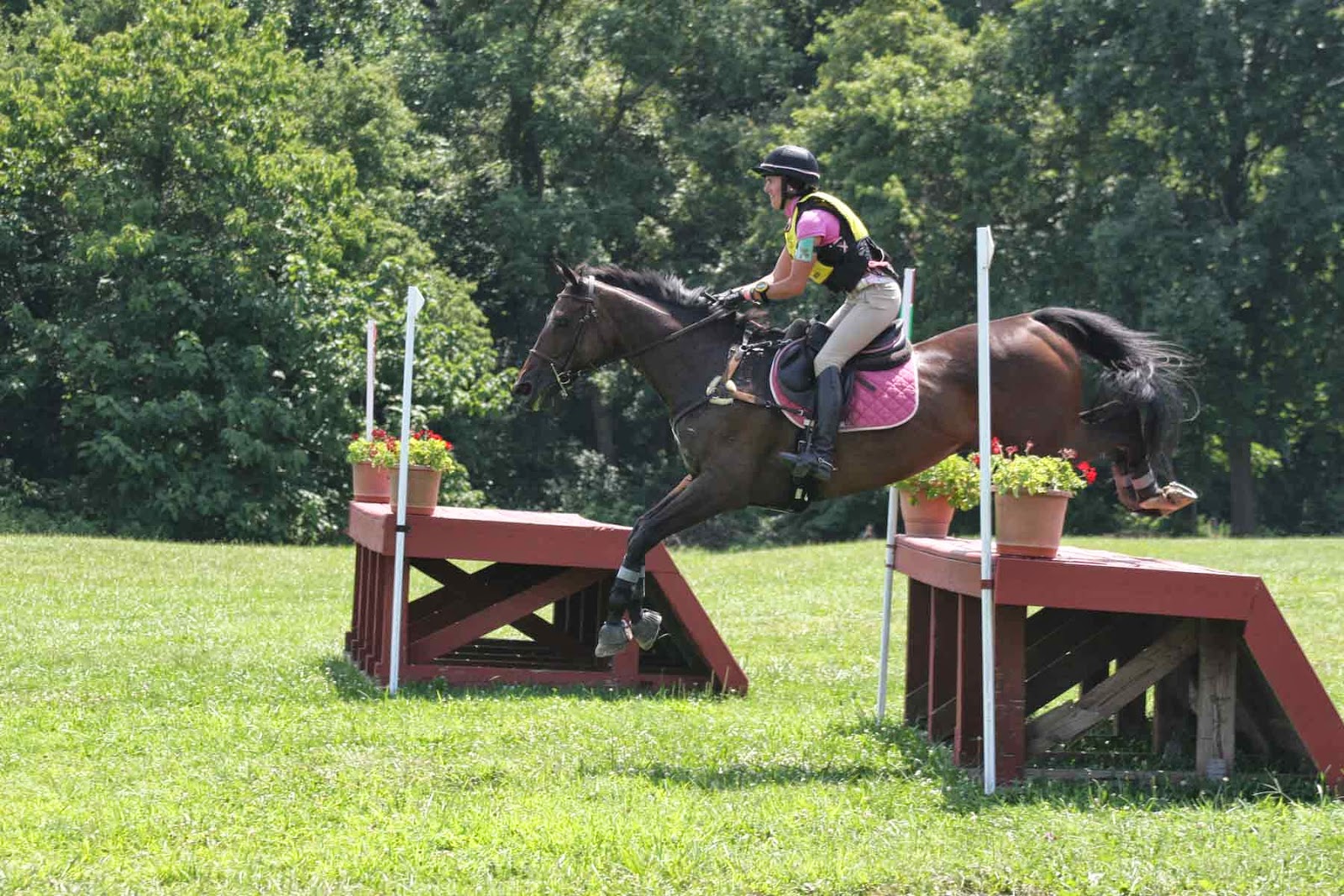 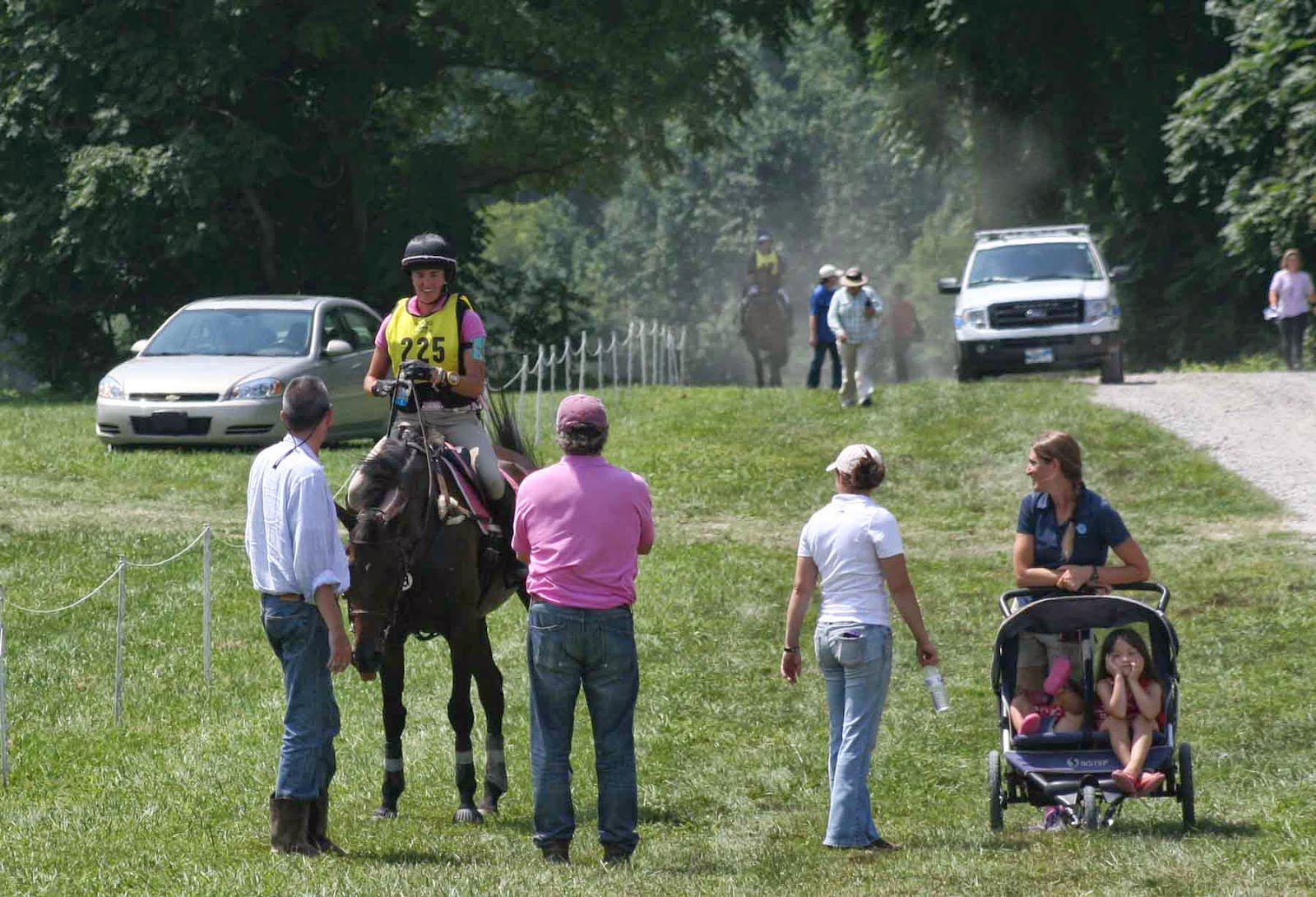 Wall Street (aka Hansel) is making huge progress in his training! His lateral work and flying changes are coming along beautifully and he is really ready to advance into a more complex and comprehensive training program that involves a good deal of over fences work! Contact Anne for more information and pricing, please.

His dam, Wallstreet Rose (aka Greta) is also settling into a training plan nicely. She is very forward, sensitive and has a light mouth - so probably well suited to a confident and secure rider. Her price reflects the fact she has been out of training for several years but she is sound, low mileage and a super mother! Fancy doesn't even begin to describe his movement - free shoulder, super reach from behind and moves with good forward energy...that's our girl Greta! 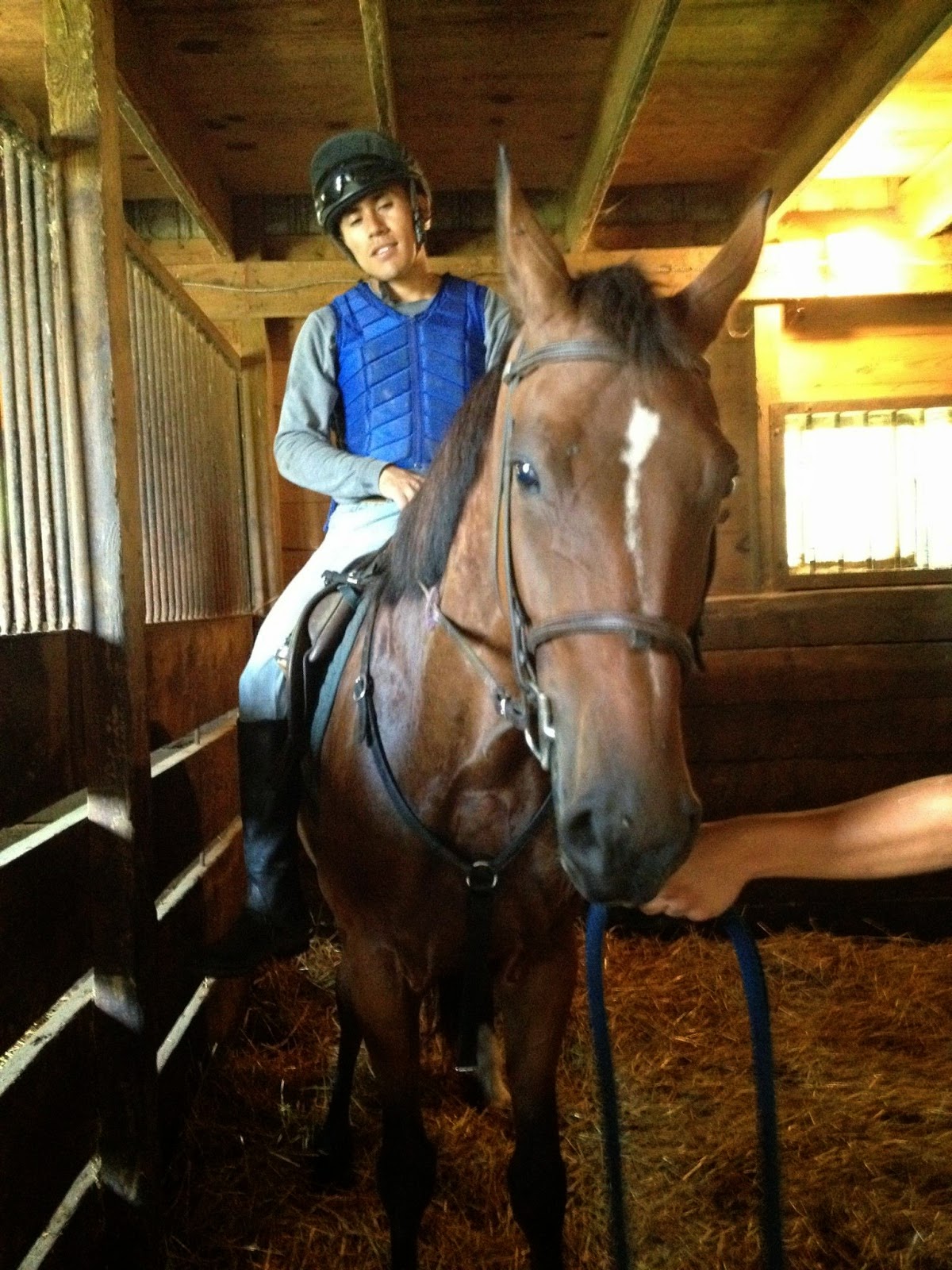 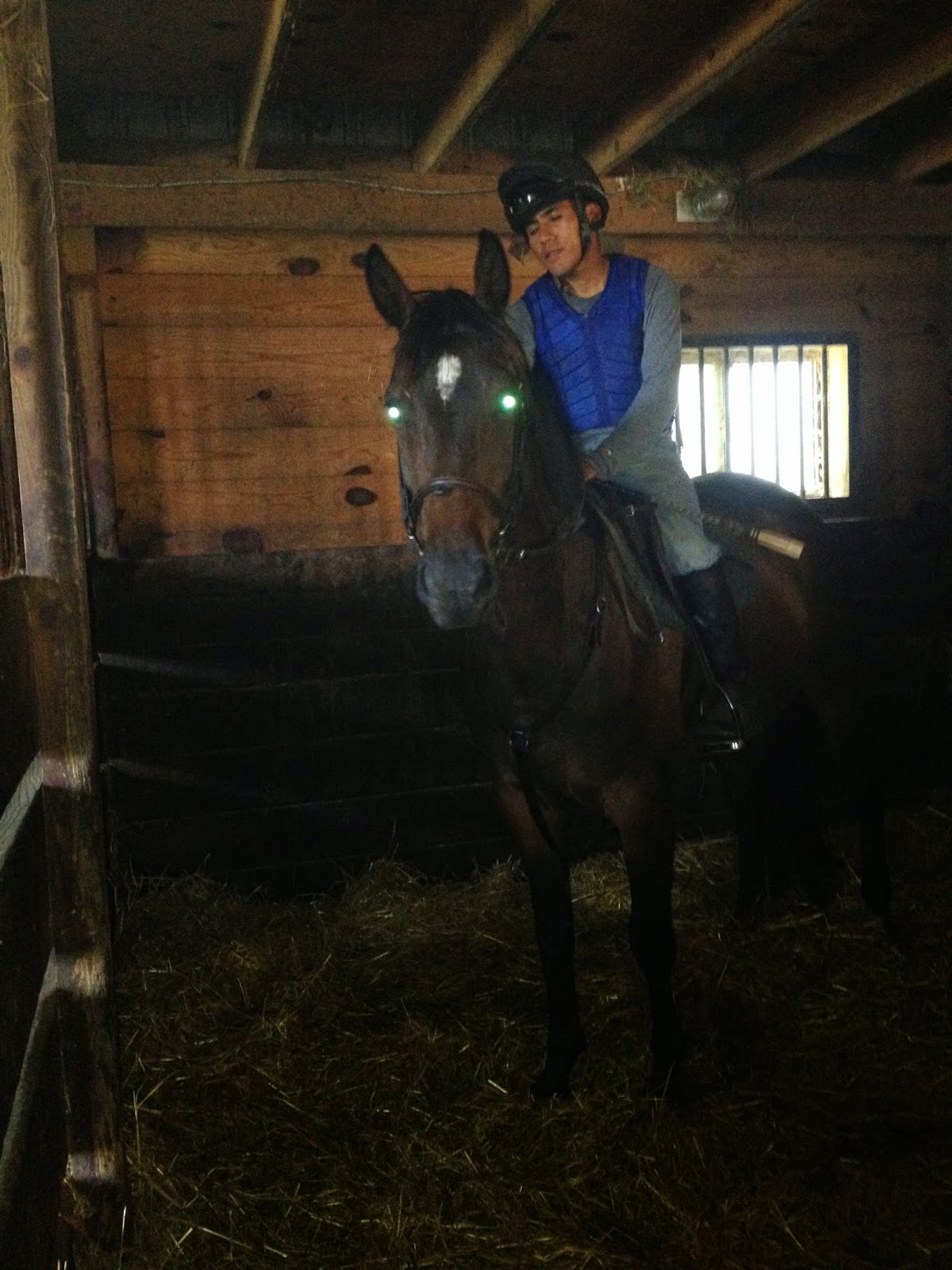 The last of our green beans are getting their undersaddle work on a daily program now. Aloysius, Wilson, Windrose, Wendolyn and Waverleigh will be available for viewing by appointment after August 15th.
Check back for updates, videos and photos!