So yesterday was a bit busy! Dad has hay down that is almost ready to bale - I'll get some photos of the fields later today as it is all raked up and ready to go and the views are pretty cool!

Wizard WF has had a busy week so far with breeding work to start the week and a schooling show coming up this weekend! Yesterday he got to try on a baby double bridle for a few minutes and thought it was no big deal...

It is worth mentioning that there is a mare & foal and 2 yearling fillies just behind that 3 rail fence next to the ring. The ladies like to watch Wizard work and he is proving to be a good riding stallion who keeps his mind on his work!

In the afternoon, mom and I went over to True Prospect and shot some photos of Ryan and Whodini WF. They were schooling some cross country jumps including a 2 stride ditch - cabin combination! Whodini is really coming along nicely and each ride seems to be an improvement on the one before, so he has a good future ahead of him! Enjoy the photos -

So the website is in need of updating, but there don't seem to be enough hours in the day to get the horses worked and attend to it along with everything else. I'll get to it over the weekend, but in the meantime, here are a few bits of info about some of the current sales horses. We have some changes on a few of the For Sale young horses for those of you who might be in the market for a youngster to bring along. The following colts are now geldings - Wolfgang WF, Dreamcatcher WF, Aloysius WF, Drummond WF and Wilson WF. They were all top quality stock - and every bit as nice as horses we've kept intact in the past but due to space constraints and time, we opted to change their futures a bit. Everyone is healing nicely and they are now permanently our sweet boys!

Here is a bit of the lowdown on what each boy is best suited to go on career-wise:

For those of you who are more interested in the show hunter type - Wilson is a particular favorite - he is a very flat kneed mover with the typical Waldaire canter and super flying changes. His dam's full brother has enjoyed a lovely career at Carolyn Chrome's stable and is still showing successfully. Wilson has a lovely large eye, very pretty head and just screams Show Hunter when you look at him move. He is a 2008 and should mature to 16.3 hands. 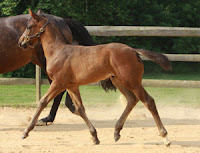 Drummond is a lightfooted, uphill classic Dressage Royal baby. He is going to be on the taller side - at a guess, 16.3-17 hands, bright bay with some chrome and oozes class and FEI talent. He is not the bravest by nature but should have a very good jump. He reminds me of Alacazam, just in a leaner, darker package.

Aloysius or Louie as he is known around the barn is on the market currently. This is the first time we have offered him for sale as he is the best of Avebury and Again and Again in a grey coat. He is correct, sweet and very, very talented. 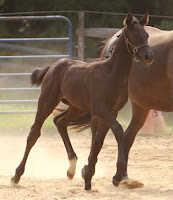 He should do well in a program that is used to bringing along top athletic ability. Louie should finish about 16.3 and is going to make someone very happy.

Dreamcatcher aka McDreamy is just that! He is about 16.1 right now and should grow a bit more. He is ready to start his undersaddle training this month and is another FEI horse (provided all goes well) in the making. His movement is very fashionable with scope and power and he is a very balanced horse - always carrying himself and uphill. 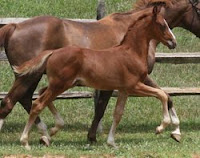 Wolfgang is best known as Puck around the barn. He is very sweet, smart and a thinker. He has a ton of chrome and will be tall - about 17 hands in the end. He had an unfortunate injury as a weanling but is sound and athletic. His pricing is set as more of an adoption fee - we would like him to have a forever home where he is not going to be expected to become a top FEI horse.

So the website will get some attention this weekend and in the meantime, I'll add a bit about each of the current sales horses during the week so you all can keep abreast of what they are up to! :)
Posted by Ellie at 7:12 AM