Congratulations go out to Dorit & Hermann!

Big news just in from Europe!

Dressage Royal is going to be represented by two sons at the upcoming World Championships for Young Horses!

Nadine Plaster and the 2008 World Champion Five Year Old Deperado OLD (Dressage Royal/Rouletto/Barsoi xx) will be competing in the FEI Six Year Old division. They enter the competition ranked in second position for all of Germany. Good luck to Nadine & Desperado! 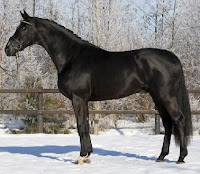 Danish Flag. UDD is a licensed son of Dressage Royal and just a handsome fellow! 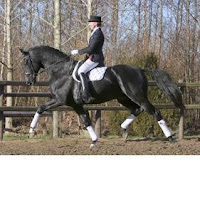 Speaking of licensed sons of Dressage Royal, some video footage of Doringcourt has been uploaded by the Bank family in New Zealand! 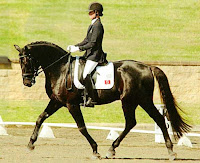 He too is a delight to watch and it is so exciting that we will have 2 of our very own Dressage Royal's under saddle next year with Daylily WF and Don William WF! And with the youngsters growing and developing - how exciting is it to see their sire's quality stamped so cleanly on each and every one of his offspring?!?!?

So with great anticipation and enthusiasm, I promise to keep you all informed of how the 'relatives' are doing around the globe! But more than that - we all have to thank Dorit and Hermann for their vision and good sense when they picked Dressage Royal out as a stallion for their lovely farm in Wacken!
Posted by Ellie at 4:25 PM