On to more current events!

So I have two new residents in my house! 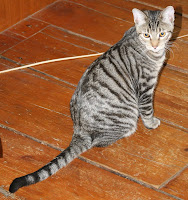 MJ had to join the household due to the fact Peter Parker is a devil cat without having his own kitten to play with! And this is not an exaggeration or falsehold...he was going to be evicted to the great outdoors and to do battle with the outspoken Oreo. 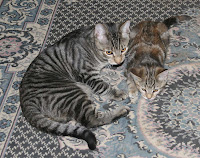 Here are their cute little faces...

And somewhat inadvertently, I have most of the cast of Spiderman - Harry (the Jack Russel) and now Peter & MJ, which is rather funny as I liked the movies but am not an obsessive fan! I suppose it is like the foals - if the name fits, you go with it!


We had our first signifcant snow overnight last night and the temperature has plummeted to say the least. I will try to get some photos of the foals playing out in the snow - they were entertaining when they had to step on the funny white stuff for the first time! McDreamy thought it might eat him alive but soon settled down into his daytime game of 'I can trot fancier than you can' with the fillies. They (of course) were more interested in the hay than any silly white powder or obnoxious colt...
Posted by Ellie at 2:56 PM