Another day at the farm

We've had quite a lengthy spell of rain, humidity and temperatures in the mid 90's, so this morning dawned bright and almost chilly with low humidity! While I was doing the morning chores, I got a good look at our male falcon just before he cruised the bird buffet a la bamboo...

Such magnificent creatures, don't you think?


Then it was time to skedaddle off to another jumping lesson with Sally on Kitty.

Kitty is such an awesome horse to jump...no hesitations, no fussing, just totally steady down to her fences.

I have spent the day griping that my eye is not what it used to be until it occurred to me that most people are not going to complain at ALL about such a minor, fussbudget detail after more than a decade of FEI dressage with minimal jumping. 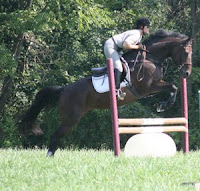 So I will stop complaining that I can't decide quite where to place the horse an just enjoy the wonderful ride that she is...It is obvious that I am spoiled when I want perfection over each and every fence.


Sally had another student there today with Karin & Adelaide! 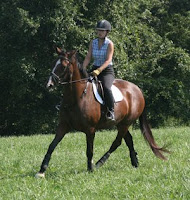 It was Karin's first outing since returning from vacation and she & Addie had a marvelous lesson with Sally. 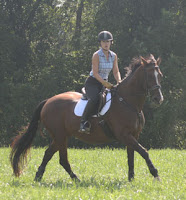 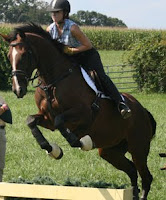 It was a real treat to watch all the tips and tools Sally gave to Karin in between having awesome fences with Kitty.


So we'll be heading back over on Thursday with another group of horses & riders to take advantage of the nice weather and good footing! 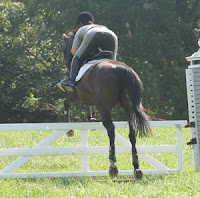 Sunday is the cross country schooling at Fair Hill for me and Kitty...if you'd like to join us, just track Sally down to make arrangements - www.sallycousins.com
Posted by Ellie at 6:07 PM