Show photos! The next week's comings and goings...so far!


Congratulations to the Blue Goose schooling show participants! Thanks to Darcy and everyone at Blue Goose who made our fun day possible!

Jen and GiGi have been working with us for just a few weeks and they rallied to go to their first dressage show together on Tuesday! Big congratulations to Jen for memorizing both of her tests and having good execution of the movements!

Karin got to ride her beautiful Adamant daughter Adelaide at Blue Goose!! They had a 61% in their first test and despite the thunder and lightning going on all around us, their second test was quite nice! 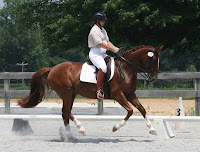 And for a change of pace, Wakanda WF got to go to a show! This was her first show in several years due to my injury and so many to bring along, so "Wendy" got pulled off of the back burner! She is a blast to show, so be prepared to see her more often!!! The first test was the Third Level Test 1 and while there is room for improvement, she was extremely well behaved and quite fun to ride. Our second test was a few minutes later and the Fourth 1. While not quite as polished as the first test (it was hot and she was a touch tired), Wendy really gave me a glimpse of how bright the future will be with her...if she does not sell first of course!

So look for Wendy at the upcoming recognized show at Blue Goose in the Third 1 and 2!