So mom did a bit of sorting of old magazines and found the 1995 AHS Yearbook. In addition to a whole bunch of dead and gone imported stallions & various mares, there were some interesting photos -

These 2 are of Able Spirit (Abundance x Today I'm Trying xx), a 1979 homebred mare who was very special to us all. She campaigned as an FEI horse for 10 years and these images are from her final year of competition with me. She was actually pregnant with her first foal - Sabrina WF during the latter part of this competition year! And she still was AHS HOY at Fourth Level, 16th in North America and in the top 4 at DAD! We did have to miss the Regional Finals as she had passed the FEI cutoff date for her pregnancy...but what a great mare! 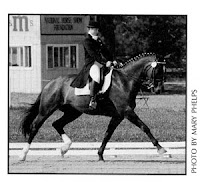 Also in that very same yearbook, was a lovely photo of our now senior stallion - Waldaire as a 6 year old! 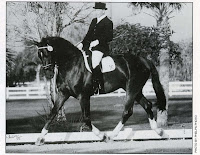 The caption reads - "Competing at the Palm Beach Dressage Derby at White Fences are Dana Fiore and Waldaire (Waldgott/Aries/Adios III). The pair won 27 blue ribbons and three reds on the Florida circuit, with scores averaging more than 71%.... Their highest score was 81.92%. At the ABIG/USDF Region 3 Championships in Atlanta, Waldaire was named the First Level Champion, Training Level Reserve Champion and Reserve Champion Breeding Stallion."
Posted by Ellie at 7:58 AM