Just a shout out reminder that our deep frozen discount is still going on!

But it might end sooner than later due to dwindling supplies, so get your order in ASAP!!

Here's a small refresher as to who's in the line up of available stallions: 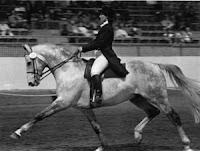 A direct son of Abundance (Absatz/Dominus/Goldfisch II) out of the spectacular producing TB mare Nobody Much (Our Tops/Goya II/Jacopo). He is one of the earliest US Bred Grand Prix horses. Even rarer still - he produced GP horses! His full brother is none other than the Hunter Hall of Fame inductee - Ruxton. Their full brother Rushton was also very successful in the Working Hunters, while still yet another full brother competed in the LA Olympics in Show Jumping and was well known as a 'packer-type' of jumper. 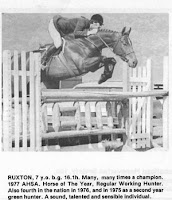 Again and Again has been a reliable producer of upper level horses for dressage. He also had several well respected show hunter offspring and event horses. His get tend to be forward thinking horses with big gaits, light mouths and excellent jumping technique.

Adamant is another Abundance son.

He was out of a lovely, kind TB mare Villa May (In Spite Of/Villon/Pillory). Adamant was a successful as an FEI horse, mid level jumper and hunter, event horse and superlative fox hunting mount. He consistently produced multi-discipline offspring with oodles of talent and the mind suited for the amateur rider. His offspring tend to have an elegant appearance with long legs, good sense of rhythm and a sense of responsibility towards their rider.

Avebury WF is a son of Adamant out of one of our Dekor (Durchlaucht/Radetzky/Femor I) daughters - Dynasty WF. Dynasty was one of the 'keeper' mares for us out of a superlative damline with multiple licensed stallions, FEI horses, champion show hunters and open Jumpers to it's credit. Avebury does not disappoint his ancestors in any way - he moved from Beginner Novice to Open Preliminary in less than 8 months of training and has the talent to move beyond as an eventing stallion. That being said, he is spending the winter here at the farm preparing to show as an FEI dressage horse in 2012.

He has a few foals on the ground currently and they have the following qualities in common - leggy appearance, good temperament, kind expression, refined heads, excellent engagement and power from the hindquarter and good use of the shoulder. Our Aloysius WF will be lightly started this winter, so check back for video footage.

Dressage Royal is the international superstar that we represent here in the United States. He is by the legendary Donnerhall out of a super producing Rubinstein/Futuro/Magister mare. He has consistently produced super elastic offspring with good minds, international quality movement and a steady temperament. 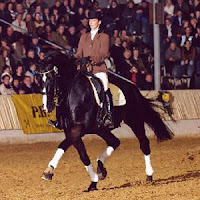 The licensed stallions Damsey, Doringcourt, UNO Don Diego are just a few of the stars he has produced thus far. Desperado OLD continues to shine as the upcoming international star - he was World Champion as a 5 Year Old in Verden and is now beating top combinations in the Small Tour in Europe. Our own Dressage Royal offspring are daily delights - very attractive, powerful movers with excellent conformation and type.


Showtime WF is an interesting stallion for those who are interested in producing show hunters. He has been campaigning for several years as an A Show Horse down in VA. 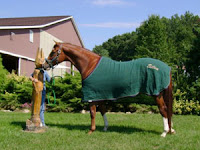 He is one of the lovely performers from our super mare line (Today I'm Trying - Viking Spirit/Royal Coinage/Alycidon) and had the perfect hack winning gaits. His jumping form was definitely what the hunter folks are looking for, so if that is your avenue of competitive interest - consider Showtime!

Waldaire is our senior stallion and the grand master of Watermark Farm. He is another domestically bred Grand Prix stallion with ample reason to be proud of his accomplishments both in the show ring and breeding shed. His lifetime average score is over 65% (earned between 1994-2006) and that does not include freestyle scores! His canter is divine (and he passes that along), with a great sense of power, suspension and 'lift'. His walk is rhythmic, pure and undulates through his entire body.

His offspring are powerful movers, very grounded and show high intelligence. They are fun to start and even better to ride. Several are out competing in the hunters with good success. A number have gone on with their AA riders as dressage horses. We have had rave reviews from event riders as they are bold over new material and very careful over fences. He reliably adds bone, so Waldaire is an excellent choice for TB mares.

Wizard WF is the youngest stallion on our list of available stallions. He is continuing to develop as a top FEI prospect with a larger foal crop due in 2012. A number of professional riders have been kind enough to ride him for me during the last year and all of them ask if there is a chance that I would send him with them to FL, or SC as a competition stallion. He is a blast to ride, powerful moving, very obedient and attentive to the rider and even more fun to compete. Over fences he has good bascule, use of the shoulder and easy changes. Actually his changes have been easy from the beginning. :) 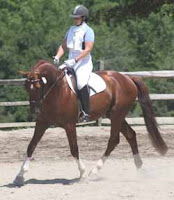 His first foal arrived in 2011 and is a stunning black filly with some hind socks and lovely blaze. She is out of a Wallstreet Kid (Warkant/Eiger/Perfekt I) daughter.