Thank you to all our Inspection Participants!!

Thank you's go out to our Judges, horse and pony breeders and everyone who participated in our AWR/NASPR Inspection on Saturday! Special thanks go out to Pat, Ric, Sara, Melissa, Peg and Ken for all that you did during the busy and WET day!

Barbara and Jessy MacKnew are returning breeders and friends and as always it was a delight to catch up with them! Our former broodmare Aly Alice xx is currently out competing with great success (including winning their division of Elementary at the recent Fair Hill Starter Trials - finishing on their dressage score of 25!!!!) - so it was great fun to see their 2010 colt by Popeye - Picasso LG 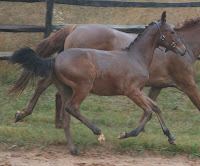 Picasso was the Pony Champion!!!! YAY for Jessy and Barbara!!!

The Pony Reserve Champion was Firenze by Forrest Flame and owned/bred by Julie Skaife. This fancy colt had springs for feet and was simply fun to watch!

From our own breeding program - 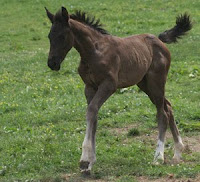 Windrose WF (Waldaire x Wallstreet Rose WF by Wallstreet Kid) was a First Premium with a score of 7.8! "Bailey" was bit over the top with all the 'new' stuff around the arena, so she did not show off her lovely gaits as well as we had hoped. She did receive an 8 for conformation and positive comments in all the areas. 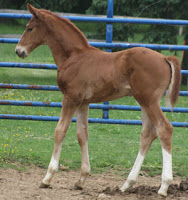 Waverleigh WF (Waldaire x ... See MoreSouthern Leigh WF by South American Way xx) received an overall score of 8.5 and a Premier grading as well as the Site Reserve Champion sash! "Izzy" had all 8.5's for her marks, so we are very pleased with this big filly!

Waldina WF (Waldaire x Sabrina WF by South American Way xx) was the Site Champion with an Overall Score of 9!!!! and a Premier grading! "Christina" wowed the judge with her great attitude and sense of self as well as her excellent engagement and carrying power in all 3 gaits.
Posted by Ellie at 6:25 AM