A wonderful day at Dressage At Devon 2010! 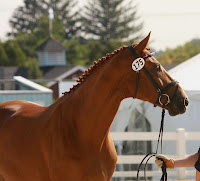 We wrapped our daily duties early yesterday and all went up to Dressage at Devon. It is the 35th anniversary of the show and as mom & dad were the main organizers in the beginning. It was a treat to have so much time to go and enjoy the show that has literally been a part of my life from the very beginning of my life. Every year seems to have involved a trip to Devon and either be cheering for friends and family or to be a competitor...so it was a delightful afternoon and evening.

During July we had been invited to the Preview Party in Radnor (???) but were unable to attend as we were bringing in 20 acres of hay with bad weather in the forecast. The organizing committee had asked us to dig through our albums and find photos from DAD over the years. A few of them have been posted here but it was a grand surprise to be in the committee stand and find TWO of mom riding our FEI horses blown up to 4'x6' prints!!!! One shot was of Valentino in the late 70's and the other is of Abundance the very first year of DAD!!! So it was a great thrill to see mom in such a prestigious location and on 2 of our treasured FEI horses!!!

The Thorncroft Mainstreamers did an awesome color coordinated 6 person quadrille! They used super techniques to keep their spacing and had a lovely pinwheel during their exhibition! The Newcastle County Police Department's Mounted Officers did several demonstrations of their horses skills and methods of subduing crowds - it was a delight to see such large horses being used for 'real' life situations...just a treat all around!

And then there were the Grand Prix Special rides - Shawna Harding and Come Back III were so impressive!! He is a big Danish gelding and just so very powerful! It has been a few years since I was lucky enough to show Grand Prix and several of the horses reminded me of my schoolmistress - Duell Anastasia! She was quite a character and taught me so very much, so I was able to observe lots of other horses training their riders throughout the tests...just a lovely moment to think back on and look forward to competing at that level again!

I can not go on any longer without mentioning Catherine Haddad and Winyamaro! What an electrifying performance. She might have been our alternate for the Alltech Games but holy smokes what a rider!!! W is a flashy light chestnut with lots of white markings and a bouyant way of going. He is just 10 years old and her choreography has tightened up since this ride back in 2009 - http://www.youtube.com/watch?v=oVE0cq1zqWI but the music is the same. There are now double canter pirouettes and so much more power in the half passes, piaffe and passage! It was a pure thrill to be in the stands - what a great combination they are!!!! Her top hat was a custom brown silk from the Dutch hatmaker extrodinaire - L'Hiver (maker of my awesome navy blue silk). Her tail coat is a chocolate brown and her boots and tack are havannah brown...it really works well with W's pale chestnut coat and flaxen mane and tail. They are a joy to watch and it will be fun to see if they are on the team in London! :) 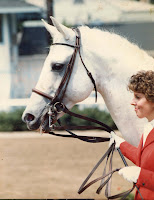 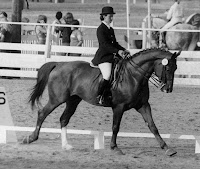 So my apologies that I did not shoot photos for the day - it was a lovely break to see lots of good friends and catch up without feeling obligated to stick to the ringside and photograph. The horses and riders were lovely and it all deserved more media attention but...it was a chance for some down time for me!

Enjoy the photos from the past and I will do better next time! Promise!
Posted by Ellie at 4:23 PM