Wizard was a star! 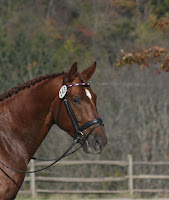 Wizard returned home like the cool customer that he is after a triumphant day at Buck's County Horse Park V! It is a wonderful feeling to have such a focused young horse that also happens to be a stallion!

He was a bit concerned about the judges box (hadn't seen one of those before), so there was a bit of unsteadiness going up the centerline the first time but by the end of the second half circle, Oz thought it was no big deal. From the judges perspective there are some areas of improvement to work on - they would like to see bigger gaits (more of a medium trot and canter) and for me to not focus on the accuracy of the movements in order for his scores to go up in the FEI YH Tests. He got 7's for his trot and walk (the nervousness about the box showed in the transition at C) and then 8's for his canter (uphill, balanced and lovely) and the general impression!

As he was the only horse in the class, it could be said that we won...but that is silly! He was a very good boy who got lots of extra carrots for a good days effort instead of a blue ribbon.

Thanks to Mom for the photos, Melissa for the video and Dad for being the cheerleader at ringside!
Posted by Ellie at 8:25 AM