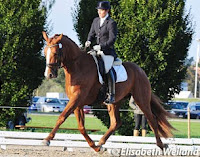 Licensed stallion son Dandy de la Roche (out of a Walt Disney mare) convincingly won the FEI 5 Year Old Championships with a score of 8.57 by a margin of .41 points! Congratulations!
http://www.youtube.com/watch?v=duMdfwSxYe0 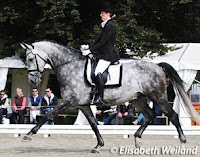 Don Camillo (out of a Hill Hawk xx mare) also trounced his competition in the FEI 6 Year Old Championships! He scored 71.35 with the nearest competitor being almost 2 full points behind!

Both horses defeated their respective age group's returning champions by a significant margin!

A full write up can be found here - http://www.eurodressage.com/equestrian/2010/09/21/kayal-du-perchet-dandy-de-la-roche-don-camillo-ii-win-2010-swiss-young-horse-championship
Posted by Ellie at 6:18 AM